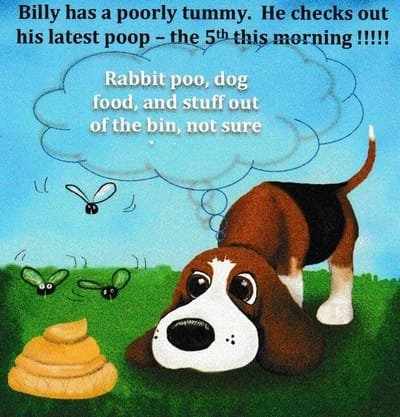 Beagles are generally a healthy breed.

Beagles are medium sized, short haired dogs with no exaggerated features of conformation. They have a merry disposition and are very sociable, which makes them popular as family pets. They were originally bred to hunt hare and think for themselves. This gets them into trouble at times as they follow their noses to find food or other exciting, usually unsuitable, things to eat, often resulting in an upset digestive system. Anyone who owns a beagle needs a good sense of humour.

Our website www.beaglehealth.info talks about canine health in general, as well as conditions that are specific to beagles and includes discussions about the ones we feel are the most important. An internet search for beagle health matters may bring up an alarmingly long list of diseases and conditions, but the beagle is unique in being used for research and there are many thousands of papers published from this. Many of these are obscure and may relate to the laboratory population, which has become genetically selected.

Good breeders DNA test their beagles for the main conditions that may occur in pet and show beagles. This means they have done their best only to breed from healthy parents.      At the moment the four conditions most likely to be debilitating in affected beagles are MLS, NCCD, IGS and Lafora’s Disease, plus a fifth that appears to be less of a problem: FVII deficiency. These are all recessive conditions and are explained in more detail on the website. Briefly each dog carries two copies of the relevant genes, with one inherited from each parent. An affected beagle has two bad copies and will be affected by the condition. A carrier (one copy only) or a clear dog (no copies) cannot get the disease and will lead a normal life as far as these conditions are concerned. To avoid affected puppies, anyone breeding must know the dog’s status, as carriers of the first four can only be bred to a clear dog.
Lafora’s Disease is our newest test (released at the end of 2017) and is a slowly progressive metabolic condition, ultimately leading to neurological signs and seizures.  In some ways this is one of the most important as it is not visible until the beagle is a few years old. Thus the beagle could have been bred from prior to symptoms showing.  We hope all breeders will take this on board and we will have no puppies from unscreened parents in the near future.
Musladin-Lueke Syndrome (MLS) is a condition that results in several visible physical deformities as well as other issues, such as early arthritis and seizures in some cases. This was the first condition we started screening for and we now have many hereditarily clear beagles in the UK.  Along with Neonatal Cerebellar Cortical Degeneration (NCCD) these have been recorded for many years and there is really no excuse for breeders not to screen for them. NCCD produces a coordination problem visible by a few weeks of age and affected beagles cannot control their hind legs properly. Both these conditions must be tested for under the UK Kennel Club Assured Breeders Scheme.
Imerslund-Grasbeck Syndrome (IGS) is caused by an inability to absorb Vitamin B12 properly. This is treatable with regular B12 injections but it is not curable. It appears to have quite a low incidence in the UK but much higher in some countries in Europe so we need to be aware of it.
FVII is one of the chemicals involved in blood clotting. Fortunately it seems to be a minor condition in most beagles, as many affected dogs have surgery without any issues. However if a dog was compromised in some way it is wise to be aware of its status.
We are also investigating epilepsy and steroid responsive meningitis (SRM) with the Animal Health Trust. We need DNA samples from affected and related beagles for this work. For more information on this and other beagle health-related matters please contact the UK the Breed Clubs’ Health Coordinator, Samantha Goldberg via samgoldberg@btinternet.com 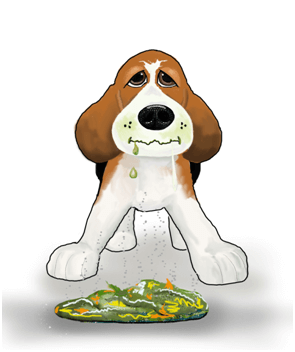 Information about when to neuter your dog / bitch can be read below:
Recommended Age of Neutering-why early neutering is bad
By Samantha Goldberg BVSc MRCVS

The following article is a review of current literature and discussion about the perils of early neutering.

Beagles are a medium sized breed and age of maturity of the skeleton particularly bigger bones is at least 12 months. Testosterone and oestrogen are involved in some of the long bone formations in the body so removing this too early can affect correct growth leading to prolonged growth and poorer quality bone with abnormal mechanical behaviours of the joints (1). Early neutering –ie before skeletal growth has finished results in taller leggier hounds as the closure of the plates in the long bones is helped by release of puberty hormones. There is also increased risk of cranial cruciate rupture, intervertebral disc disease, hip dysplasia and patella luxation being cited in some breeds. The number of breeds listed as affected is likely to increase as we know more.(2-6)

Bitches may be sexually mature before the body has finished developing physically and mentally. Although they may be able to come into season they have not finished growing if under 12 months and will certainly not have finished maturing mentally. Beagles will generally come into season when they have reached at least 6 months of age but there is a big variation and some will be 18 months before they reach sexual maturity. Some families genetically are later than others and it is best to be patient and not just neuter to suit the human family. The season is only three weeks and a well crate trained beagle can cope with plenty of chews and walks on a lead where the number of other dogs is low.


Their study is widely quoted and there is no doubt that repeated cycles do increase the risk as this is shown in countries where neutering is not routinely practiced such as Scandanavia. However allowing one season allows many other very important health issues to be reduced.

As vets in prepubertal bitches we commonly see cystitis, irritation around the vulva and yellow/greenish vaginal discharges, which resolve once the bitch has had a season. The prepubertal vulva is very small and often recessed allowing skin irritation in the fold.

Urinary incontinence is more common in neutered bitches. In fact one of the treatments for this is a low daily dose of oestrogen supplement. The incontinence is caused by sphincter mechanism incompetence (SMI) which basically means the tissue closing the neck of the bladder and which allows urination under control becomes weak and involuntary urination occurs. A study (8) of over 333,000 records using Vetcompass (an anonymised system which allows review of UK veterinary practice records) showed an 3 times increased risk of neutering and increased weight for SMI. Dogs over 10kg have an increased risk. This applies to general body weight as well as obesity. In other words keeping your dog slim is essential. There are not many beagles under 10kg mature correct body weight but keeping them fit is a great help. SMI in male dogs is not very common and weight control in males is needed for other reason.

Beagles are a breed bred to think for themselves whilst out hunting. Thus they may be harder to recall and often get distracted when off lead, making yourself more interesting than a hare is difficult! Neutering will not alter this! In male beagles one of the commonest things I hear is “he runs off” “I think he is looking for bitches”. Actually it is highly likely that dog is also hunting and this is not driven by testosterone. A heedless teenage beagle is best trained first and then neutered.

Teenage beagles generally need consistent guidance on how they fit in the family pack. If they are neutered too young that behavior can become fixed as they need to come out of puberty to be mentally mature. There is a lot of work looking at behavioural issues with dogs in rescues and when they were neutered. So far it seems likely that more dogs ending up in rescue with behavioural issues were neutered early-ie under 12 months.

Neutering reduces metabolic rate and this means they need fewer calories or more exercise to balance it. Often neutering is carried out without the vet warning the owner of this. Thus we hear “she is overweight because she is speyed”. Actually not true-being overweight is cause by eating more calories than are expended. Overweight dogs have higher risks from many health condition-diabetes mellitus, joint issues both due to increased mechanical strain and also inflammatory mediators released the higher fat levels, and obvious things such as heart disease due to increased work load.

Neutering male dogs directly reduces risks of increased prostate size due to testosterone (not the same as tumours) and in bitches removes the risk of pyometra a life threatening uterine condition and ovarian cancers. These effects are very positive.

To summarise neutering should be carried out at the correct time to maximize health in your dog and afterwards their life style may be changed a little eg calorie control. Neuter to reduce risks of many health conditions but do it at the right time to maximize the longevity of your beagle.